The readings in Self and Other were truly different from anything I had read previously, I was not drawn to comics before, but through this class I became more knowledgeable in what they mean and represent for people. They aren’t just drawings meant for children, they hold powerful messages. Very early on we were presented with Ms.Marvel, a story that was powerful, heroic but not just because it was a superhero comic. It presented the world of comics with a new face, there was no longer just the average white American girl turned hero. Kamala Khan was a Pakistani American and it was clear that she could bring a different view on what comics could be like. I think that it was important to see a different race being shown off in this way. It shows that the world is changing and developing. Gina Apostol mentions that “as if there was only one way, the white dominant way, to think and read and write fiction.” When reading Ms. Marvel this was not shown, it showed true struggles of a child of immigrant parents simply trying to fit in. I saw a change in writing and became interested in the comic, which I didn’t expect. Kamala was the narrator of her own story, not just someone telling their version of it, showing that we can all have a voice and tell our own side of every story. Through this and other readings I was about to think and analyze further. 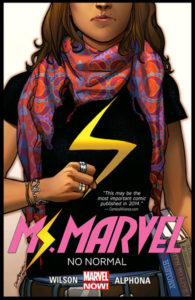 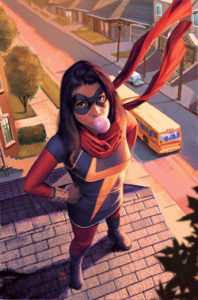 When I write, it is sort of like having a conversation, just brainstorming ideas and letting them all out. I usually write things down in my notes and then edit the final copy. I like to say my thoughts out loud and then write them down because it flows more smoothly for me, this is what I have done for most of the papers I’ve written in this class, especially for my research paper because I spoke about a topic I was passionate about and I had different ideas that became jumbled. That is my process while writing, I start off small and everything jumbled and then I begin to form coherent sentences and add in the examples. 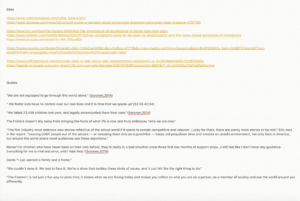 Free writes during class have also allowed me to put down my ideas and “rant” about topics. When discussing themes in Cece Bell’s “El Deafo” friendships came up and I thought of my own friendships and how important a friend could be in your life. For my views on Cece’s “friendships” I wrote, “they constantly belittled her, calling her their “deaf friend” when she was a girl like any other, but because of her disability she was no longer “normal”. She had to be “protected” by everyone and couldn’t make her own decisions.” Cece was a young girl that faced the challenge of growing up deaf because of a medical complication as a child and this changed her life forever. Everyone around her treated her differently which made her feel like an outsider. We have done multiple free writes on the different readings and it has helped tie in what we have discussed and what we think in a different way. 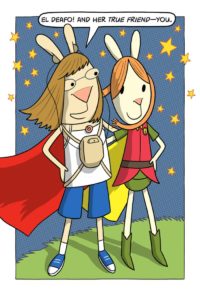 Reading and writing have always come hand in hand, in this class I improved my reading and writing because I was encouraged to analyze the readings deeper and make inferences on that rather than just responding to how I felt, I spoke about greater themes. For “Soon I Will be Invincible” we touched upon the meaning of evil, and we all developed different views and meaning of evil outside of just the book, we defined it for society and the world. Self and Other is what the class revolved around, and it allows for broad topics to be discussed but it constantly brings up how we all interact and how everyone is affected through one thing. We branched out and looked beyond just the readings and focused on society. For my final paper I wanted to touch upon significant topics for the world but also a topic that I feel close to which was immigration and I think that the James Baldwin quote “language is a political instrument, means, and proof of power” connects well with my topic because I spoke about political issues going on and how they are challenging us. Reading and writing allowed me to see comics differently and share my voice on something I wanted to speak about.

Except where otherwise noted, content on this site is licensed under a Creative Commons Attribution-NonCommercial-ShareAlike 4.0 International license.

Need help with the Commons? Visit our
help page Send us a message

Built with WordPress Protected by Akismet Powered by CUNY